Boy Scouts – Troop 290
Boy Scout Troop 290 was started in 1957, shortly after the formation of St. Pius X Parish. It is one of the longest tenured parish ministries.
Baden Paden described Scouting as a game with a purpose. For 100 years, the ideals of Scouting have remained the same; to assist in character development, provide citizenship training and to promote mental and physical fitness.
Scouting is all about the outing which means getting out into the outdoors through monthly camping trips, activities and even troop meetings that are held at Camp Carpenter in May and June. The troop is a boy run troop where the boys are given opportunities to demonstrate leadership skills as they progress through Scouting.
Boy Scouts subscribes to a “duty to God” and reinforces that belief in the Scout Law with the 12th point being Reverent. Troop 290 is open to boys of all faiths and every opportunity is given for boys to learn about their own faith. Being a Catholic sponsored troop, we attend the annual Catholic Scout Retreat and participate in Mass on Scout Sunday together.
The highest achievement is Boy Scouts is the rank of Eagle Scout. Troop 290 has presented over 55 Scouts with this award. Their pictures are on display in the Church Hall.
Boy Scouts is open to boys who are age 11 or completed 5th grade and have not reached their 18th birthday. For more information about Boy Scouts or to arrange a visit with the troop, please contact Scoutmaster Mr. Jean Martel at 603-540-8372 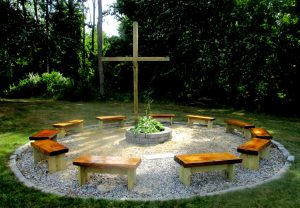 While performing a grounds cleanup with Pack 290 this spring Braxton and Lucas noticed that the meditation area had fallen in disrepair. They volunteered to replace the old log legs and refinish the top.  After several visits to my outdoor workshop over the summer they have completed the project. Last night the final cleanup the area was performed and benches were returned to the area.

This project was originally an Eagle Project that was done by Jamison Couture. 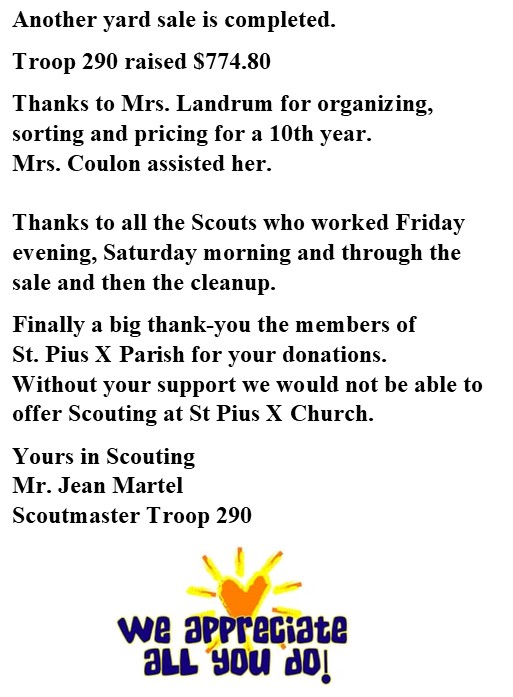